On the 23rd April 2017 a group of 16 people assembled at Mam Tor to go on a walk led by Steve Conquest to explore the Geology of Derbyshire. The weather was glorious and sunny, with clear views guaranteed.

To help explain some of the principles of geology and landscape, handout sheets had been made available in advance, which displayed diagrams of various features that would be seen on the walk.
The group was introduced to the theory of plate tectonics, continental drift and mountain building – all of which were fundamental in the geology which we were going to see. Other important concepts, such as erosion, deposition, delta and reef formation were also introduced. The walk started by going to the summit of Mam Tor to appreciate the landscape produced by some of these geological phenomena.

After descending steeply along the edge of the cliff face, a closer look was taken at some of the rocks forming the scenery. To our delight, several fossils were found, and we also had the chance to examine some of the impressive, exposed rock structures that explained how the sandstones had been formed. 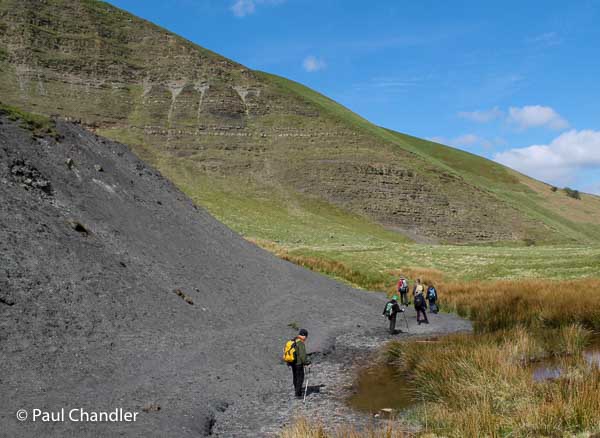 Crossing areas of exposed shale beneath the face of Mam Tor

We then proceeded uphill onto the limestones to inspect hydrocarbons (oil deposits), coral reefs and tropical lagoons and Windy Knoll Cave at Winnats Head. More fossils were identified and some small fragments of purple fluorspar (Blue John) were spotted as we descending past Treak Cliff Cavern (where a stop for ice cream was called!). The walk then carried on along the reef apron and past two spectacular gorges formed in the limestone reefs – Winnats Pass and Cavedale. The group followed the route of Cavedale to discover igneous activity in the form of a basalt lava flow. We then emerged on to the top of the limestones to follow old lead mining rakes and abandoned workings along New Rake on the return to the start point.

A great day was had by all, and the first sun tans of the year were recorded by many of us!