This walk took place on Wednesday May 22nd, and was a gentle 3 mile evening walk to look at a early lead smelter hidden in the heart of Froggatt Wood.

The walk had been arranged at short notice to coincide with the bluebells still being out in Hay Wood and Froggatt Wood – a fantastic sight with their lovely scent being an added bonus in the still evening air. 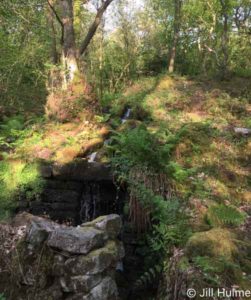 The gritstone channel which fed the water wheel

Apart from the walk leader, none of the other people who met near the Grouse Inn had ever been to the smelter before – and even the leader had only first visited it a week before. This is not surprising, as the site is well hidden in the woods away from the main footpath, and was quite overgrown until the National Trust (who own the land) did some scrub clearance work there recently. It’s now much easier to see the site’s features. The site is a Scheduled Monument and the Historic England listing for it states: “The Froggatt Wood smelt mill is one of the very few 16th-17th century smelt mills in England to retain any standing structures. The water channel and wood-drying kiln are unique within the lead industry, and the survival of an undisturbed complex of this date, with a wide range of features, is very rare”. 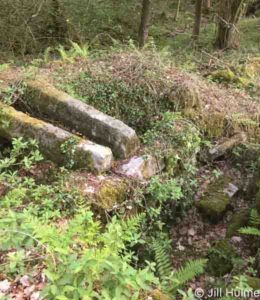 We were met at the mill by PDMHS member David Dalrymple-Smith, whose website Baslow History was where the walk leader first found out about the site’s existence. David gave us a tour of the site, which includes part of the structure where the water wheel was situated – fed by water coming down a beautiful gritstone channel. As we returned to the main path, we passed part of a large gritstone mould for making pigs of lead, and the nearby stream contained lots of pieces of slag. Very little information about the smelt mill’s history exists, but more information about what can still be seen at the site today can be found on the National Trust’s heritage website here. 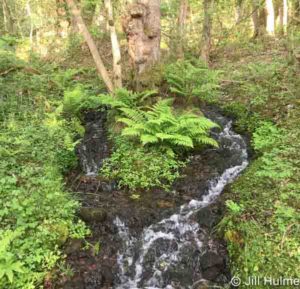 The stream contained plenty of pieces of lead slag

The path we then followed used to be one of the major packhorse routes up the Derwent Valley, and there were several places where the original gritstone paving was still clearly visible. The woods have obviously been the site of much industrial activity in previous centuries. Evidence of gritstone quarrying was everywhere, and David also showed us a curious little pond – obviously man-made – whose purpose is unknown.

Two of our walkers left us at Froggatt village, while the rest of us went up an old quarrymen’s track to Froggatt Edge. We emerged at a former millstone quarry, where there are still nearly a dozen millstones lying around – including some of the older domed types. In the quarry face itself, we examined some inscriptions – including one with the date of 1622. On the top of Froggatt Edge was plenty more evidence of quarrying, and also some very intricately carved C19th inscriptions in the gritstone boulders.

By now it was past sunset, but we were treated to a beautiful sky as we walked back along the Edge towards the start point. On our way, we saw 9 red deer at quite close quarters, and also a pair of nightjars. A fine end to a good walk which everyone enjoyed.

Thanks to Jill Hulme for allowing us to use her photos.