High Rake Mine was the subject of an 8 year excavation project by PDMHS, resulting in publication of the results in Mining History (Vol. 18 nos. 1/2) in 2011. Copies are available for purchase from the Mining Museum in Matlock Bath.

Below is a shorter account of the mine’s history written by J. H. Rieuwerts:

The mine is situated on a large vein about a quarter of a mile west of the hamlet of Windmill in the Liberty of Little Hucklow. This vein is known under different titles as it ranges from the Sir William Hill on the east to beyond Tideslow Top on the west. At High Rake shaft it is called the High Rake, but immediately west of the old Tideswell to Castleton road it is known as Tideslow Rake and past Tideslow Top as White Rake. Eastwardly and beyond Windmill it is called the Hucklow Edge Vein

In places the vein was up to 40 feet wide. At Ladywash Mine on Sir William Hill there was a cover of 796 feet of Edale Shales and Grits before the limestone was reached but this covering thinned westwardly until at Great Hucklow the vein emerged from beneath the overlying strata. The limestone dips eastwardly and at High Rake and several surrounding mines a large igneous rock mass was encountered. The old miners, as was usual, termed this rock Toadstone. Its upper surface is very irregular and above it are two clay wayboards, probably decomposed Toadstone. This rock outcrops over a wide area to the west of Tideslow Top and was met at an increasing depth as the vein was followed eastwardly towards the shale covering. The vein had been cut into the water about 1650 and the mines east of Great Hucklow are generally of a later date.

The old miners only worked in the limestone above the toadstone – the “1st limestone” as it was termed – and made no attempt to cut through into the underlying strata. Consequently the shafts along the White Rake were very shallow, usually only 8 to 10 fathoms (48-60ft) deep. 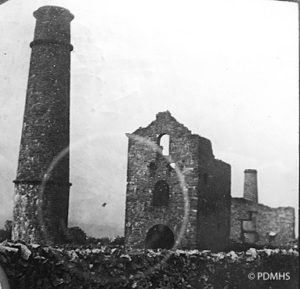 A photo of the mine shortly before demolition, with the pumping engine house and its chimney in the foreground.

Three periods of working at High Rake Mine are considered each within itself a complete cycle. The mine today does not afford a great deal to examine. Older people can remember the chimney standing but it and the other mine buildings have long since disappeared. The large drawing shaft is covered over, although it is possible to see through a hole in the side and peer down the huge shaft. A lighted newspaper reveals the sides, beautifully lined with dressed Ashlar stone as far as the eye can see. A stone dropped down falls, after it seems an age, into deep water.

The first indications that are available so far as working is concerned commence in 1757. During that year two miners John Tucker and Francis Hunt sank a shaft with the express intention of proving the vein below the toadstone in the “2nd limestone”. The toadstone was found at 47 fathoms from the surface and Tucker and Hunt eventually went down 96 fathoms at a cost of £2,529 but having failed to penetrate the rock abandoned their attempt. A further attempt was made in 1768 but on this occasion only 87 fathoms were sunk, again without success, before the venture was abandoned. These two attempts are not without significance because the papers of the 1780’s do not mention any attempt to work below the toadstone. Some ore of this time was being obtained from it and the partners were more anxious to rid the workings of water than to attempt deeper working. Not until 1834 do proposals crop up again to prove the vein below the Toadstone.

The 1780’s, however, are not without interest. Several sections are available which show the extent of the mine at this time and the proposals for draining it. The engine shaft in 1784 was 68 fathoms in depth and the “chanel” (toadstone) had been met at 46 fathoms from the surface. Two clay wayboards had been found, one at 19 fathoms 1 yard from the surface, the other one 7 fathoms lower. The water was encountered at the first clay bed a little to the west of the climbing shaft foot. They were driving westwardly along the top of the second clay bed to take the water through old workings into “Tideslo (Tideslow) Old Swallow”. The workings in Tideslow Rake near Tideslow Top were drained eastwardly by an old sough which discharged its water into a “Self Swallow”, so obviously there is a good deal of drainage along the rake both natural and man-made. The vein was very ‘shacky” i.e. cavernous and there are several references to “large opens”, etc. The sough referred to above was probably the one which was being driven along Tiddsloe Rake, in Tiddswell Lordship in 1685. 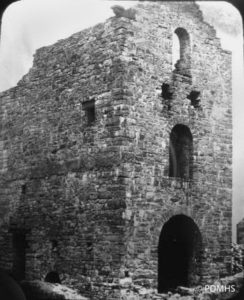 Little was done after this until 1834 when on September 15th of that year the High Rake Mining Company was formed with the expressed purpose in mind of bottoming the “Channel” or “Toadstone” and working the vein in the underlying limestone. This venture was to be one of the most costly failures in the history of Derbyshire leadmining. The old High Rake shaft was to be widened, deepened and lined with Ashlar stone. By 1840 pumping problems had arisen and manufacturers of pumping machinery were invited to submit tenders for the erection of a steam engine.

The Butterley Company also were invited to submit a tender but ultimately the Milton Works estimate of £1360 was accepted for an engine with a 70 inch diameter cylinder and a stroke of 10 feet. Additionally a steam whim had been purchased from the Magpie Mining Company at Sheldon for £300. This had a cage attached and worked with a 20 inch diameter cylinder.

By 1846, the shaft was 604 feet deep and was still in the toadstone, in 1850 it was 720 feet deep and still in the toadstone. At this stage the Company decided to call in F.C. Gillatt, a Chesterfield mining engineer. Already £19,387 had been expended in this marathon mining adventure and the partners were obviously extremely worried. Gillatt had submitted a report in 1850 and in this he outlined three main recommendations. Firstly, that the sinking of the shaft be discontinued and a boring commenced to ascertain whether the base of the toadstone was at hand. Secondly to push forward the 80 fathom level to attempt to intersect the limestone. This level had already been driven 200 yards or so eastwardly from the shaft and the vein was 2-5 feet wide in the toadstone and in places yielded a fair quantity of ore. He did not recommend driving westwardly as it was feared a large volume of water would be tapped. Thirdly, the 118 fathom level was to be pushed a little further. Very little ore had been found at this depth and in addition a small spring had been struck but the flow of water was not regarded as serious.

A second report was made by Gillatt in 1852 and this was far from comforting. The 80 fathom level was still in toadstone although rises had been put up into the limestone. There was insufficient ore to repay working. Pumping was not carried on below the 80 fathom level and consequently the 118 fathom level was not examined. The outcome of all this was that in March 1853 Gillatt was again called in but on this occasion to value the plant. The pumping engine was valued at £1147. 12. 0d and the entire plant at £2703. 9. 6d. Eventually it was all sold to the Mixon Mining Company for £1987. 10. 0. The Mixon Mines are situated in a small outlier of limestone on the Staffordshire-Derbyshire border and were worked mainly for copper.

Thus the High Rake Mining Company went out of business and one of the strangest of all, the Derbyshire lead miners struggles ended. The toadstone was never bottomed and in Black Hillock shaft, not far away, 100 fathoms were gone through without finding the bottom. At this mine a large spring was met in the shaft bottom which necessitated the abandonment of the mine.

How much deeper the shaft would have to have been sunk to reach the limestone will probably never be known, but in view of what is now understood about the mineralisation of the Peak District lead veins one cannot help feeling that the miners would still have been disappointed had they reached their goal.