Work has started to repair some of the oldest buildings at the Magpie Mine near Sheldon. The site (which is managed by the Peak District Mines Historical Society) is a Scheduled Monument, and probably the best preserved example of a C19th lead mine in Britain. The buildings at Magpie Mine, which are constructed from the local limestone, suffer from the severe weather conditions experienced on the exposed limestone plateau, and a 2013 survey (funded by Natural England) identified some £250,000 of repair work needed to maintain them in a safe and viable condition for the future. 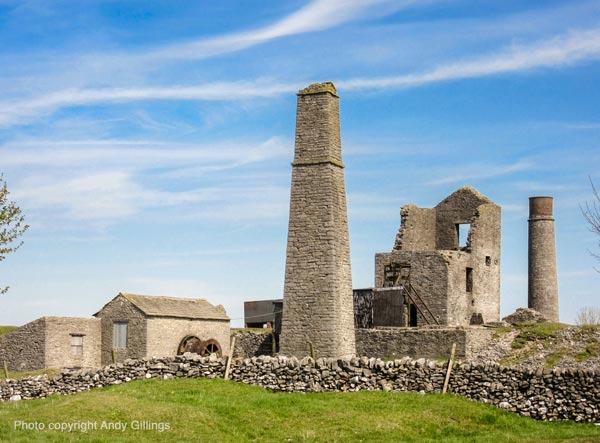 The Square Chimney – one of the oldest structures on the site – was highlighted as being in the most urgent need of remedial work. It was originally built in 1840 to serve a steam-powered winding engine. The original boiler house and engine house have long since gone, but the chimney was re-used to serve a later winding engine in the ‘Long Engine House’. The 2013 survey reported that although the Square Chimney appeared from the outside to be in reasonable condition, an internal examination using modern rope-access techniques revealed that some of the inner skin of stonework had fallen away. The examiner actually reported that he ‘could see daylight through the gaps between the stones’.The repair work is being funded partly by the Society, plus a £74,000 grant from the Heritage Lottery Fund, and will be carried out using traditional techniques – including the use of lime mortar. It is planned to complete the work by early August so that the mortar can start to cure before the onset of frosty weather. Repairs will be carried out to the chimney itself, the associated ground-level flue from the Long Engine House, and the small building at the base of the chimney.The Heritage Lottery Fund grant will also be used to improve the information that is provided for visitors to Magpie Mine. A series of display panels in the building at the base of the chimney will explain the history and development of Magpie Mine and the work carried out on the Square Chimney. They will also describe the ecology of the site, including information about the wild flowers (including rare lead-tolerant species) that can be found there.There will be a chance to see the completed work – as well as the rest of the site – at our Heritage Open Day on Sunday, September 11th. More details can be found here.