The earliest recorded workings at Magpie Mine in the Peak District date from 1740, and the mine was only one of several such ventures working different lead veins in the same area. Right from the start, the miners had difficulty in keeping the workings free from water, but by 1824, a Newcomen type pumping engine had been erected on the Main Shaft. This led to the production of 800 tons of lead in 1827 – a record that remained unbroken until 1871. 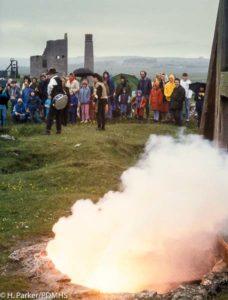 For years, Magpie Mine was troubled by disputes with the neighbouring mines over who had the right to work each vein. Miners from Magpie Mine and Maypitt Mine were both working the Great Redsoil Vein, and would light fires underground to smoke each other out. The arguments raged for years, both underground and in the courts. In 1833, three Maypitt miners were suffocated by fumes from fires lit by Magpie miners, and 24 Magpie miners were put on trial for their murder. Several were freed immediately, and eventually all were acquitted because of the difficulty in identifying the individual culprits – as well as the provocative actions of the Maypitt miners themselves. It is said that the wives of the “murdered” men put a curse on the mine, and the effect of the disputes was to ruin the mine, which closed in 1835. You can see a 39 minute video by Peakland poet Simon Unwin about the “Magpie Murders” here.

In 1839, John Taylor, the famous Cornish mining engineer was brought in to re-open the Magpie Mine, which now incorporated the Great Redsoil workings. He introduced a number of innovations, including steel borers, safety hats, safety fuse, and iron winding ropes. He also introduced a more regular pattern of shift working and payment for his workers, some of whom had come up from Cornwall with him. He deepened the Main Shaft to 208 metres, and also installed a 40-inch Cornish pumping engine. When this proved inadequate, he proposed to replace it with a 70-inch engine, but the proprietors could not agree. Some felt that a sough (a drainage tunnel) would be a better solution, and appeals to the Duke of Devonshire to adjudicate fell on deaf ears. Various attempts were made over the next 30 years, but it was not until 1873 that construction of the sough started. It took eight years to drive from the River Wye near Ashford-in-the-Water to meet the Main Shaft, a distance of 2km. It was the last major sough driven in the Derbyshire orefield, and still discharges 4 – 6 million gallons of water per day. 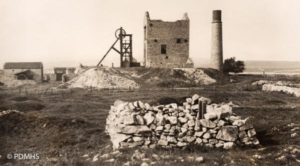 Magpie Mine photographed by F. H. Brindley in 1930. The caption reads: “Climbing shaft in walled enclosure in foreground. Ladder projecting. Said to be 600ft deep.”

Production of lead continued on and off into the 20th century. An optimistic report in 1913 promised reserves of four million tons, which attracted businessmen from Sheffield and Glasgow to join forces with Edgar Garlick, the owner. Their venture closed in 1919, and although Garlick re-opened the mine in 1923, he went into liquidation the following year. Nothing then happened until after the Second World War, when Waihi Investment and Development Ltd attempted to work the mine using submersible electric pumps. A new winder – in reality a ship’s winch fitted with a diesel engine – and a steel headgear were installed. Despite this more sophisticated equipment, no large body of ore was found, and with the end of the Korean War and the fall in the price of imported lead, the mine closed for the last time in 1954.

In recognition of its national importance, Magpie Mine was listed as a Scheduled Monument in 1974. Click here to see the full Scheduled Monument listing for Magpie, Dirty Red Soil, Maypit, Horsesteps and Great Red Soil lead mines.

The Peak District Mines Historical Society has published a guide book to the history of Magpie Mine. Copies (£1 each) are on sale at the Peak District Lead Mining Museum in Matlock Bath, and also from the Agent’s House or Smithy when Society members are on site. See here for more information about visiting Magpie Mine, and details of what there is to see at this fascinating and atmospheric site.