Drone flying is only permitted with advance agreement more…

The atmospheric remains of Magpie Mine are one of the best places to visit in the Peak District and one of the top industrial heritage sites in Derbyshire. It was the last working lead mine in the Derbyshire orefield and is probably the best surviving example anywhere in the UK of a 19th century lead mine. The mine has a fascinating history spanning more than 200 years of bonanzas and failures, of bitter disputes and fights resulting in the “murder” of three miners, and a Widows’ Curse that is said to remain to this day. 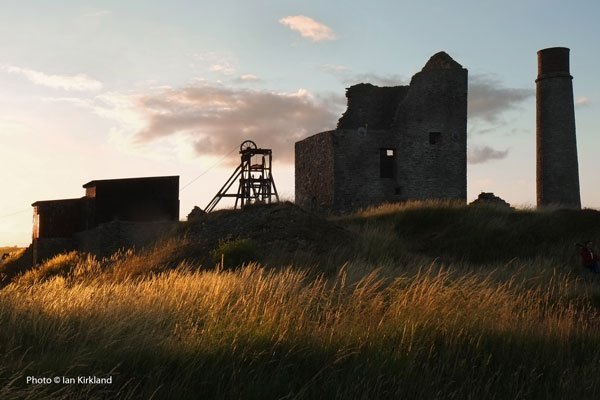 LOCATION
Magpie Mine is located near the village of Sheldon in the Peak District, about 5km west of Bakewell. Its Ordnance Survey Grid Ref is SK173682 and postcode DE45 1QU (please be aware that some sat-navs may take you to Sheldon village). You can also see it on Google Maps here.
The mine site is crossed by several public footpaths as well as being Open Access Land (see here for a map of Magpie Mine), allowing public access on foot at any time.

PARKING
The access track to the mine from the Bakewell to Flagg road is, a private road for use only by the local farmers and PDMHS members. There is a very small amount of roadside parking – take care not to block the gateways if you park by the roadside.
Please consider alternative approaches, there are several other parking places less than 1/2 mile, 1km from the mine including Sheldon Village. The chimneys make it easy to find the mine from a distance.
Many popular Peak District walks from starting points including Ashford-in-the-Water, Bakewell, Monyash, Flagg, Over Haddon pass through the Magpie Mine site too.

WHAT TO SEE ON YOUR VISIT TO MAGPIE MINE 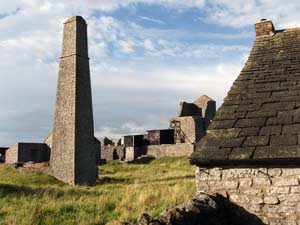 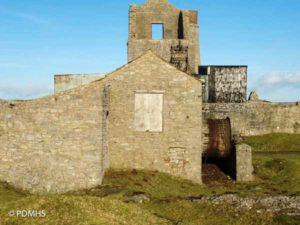 Every era of working has left its mark on the Magpie Mine site. There are numerous mineshafts – all now blocked, or capped for safety – so there is no longer access to any of the underground workings. The most impressive features are the ruined Cornish Engine House which dates from 1869, and the adjacent circular chimney (built in 1840 to serve an earlier engine, but then re-used).

A similar thing happened to the Square Chimney, which was originally built in 1840 to serve a winding engine, of which all trace has now disappeared. When the horizontal winding engine (easily identified by the winding drum on the outside of the engine house) was installed later in 1869, a flue was built to connect the existing chimney to it. The Square Chimney and flue had suffered from their exposure to the weather and were in urgent need of repair, so were renovated in 2016 with the help of a substantial grant from the National Lottery.

Just in front of the Cornish Engine House is the 728ft deep Main Shaft, marked by the steel headgear and cage dating from the mine’s last phase of operation in the 1950s. On a bright day it may be possible to look through the grille on the Main Shaft and see the water over 500ft below (the lower part of the shaft is flooded). The mine is drained by a sough (drainage tunnel) which emerges over a mile away on the south side of the River Wye (at Grid Ref SK180698) about 1½ miles west of Ashford-in-the-Water, just upriver from the Bobbin Mill and its bridge over the River Wye. It still discharges about 4-6 million gallons of water a day. The corrugated iron shed housed the winder and has the distinction of being one of only three corrugated iron buildings in the country to be accorded Scheduled Monument status. 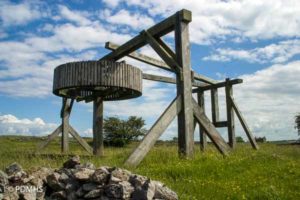 North of the Cornish Engine House is the circular powder house (1840), whilst to the east a replica horse gin has been erected on the Redsoil Engine Shaft. Another gin circle can also be seen at the western extremity of the site, serving the original Shuttlebark Engine Shaft (1760).

The Agent’s House and adjacent Smithy were built in the 1840’s. They have been renovated, and are now used as the Field Centre of the Peak District Mines Historical Society. Except on Heritage Open Days or by prior arrangement, neither of these buildings are open to the public, but Society members wishing to use them should contact the Cottage Warden. Guided tours are available on our Heritage Open Day, or can be arranged at other times for groups of six or more visitors if booked in advance – please contact magpiebookings@pdmhs.com or the Peak District Lead Mining Museum. We welcome educational visits to the site, and a free downloadableTeacher’s Pack is available.

You can read more about the history of Magpie Mine here. The Society has also published a guide book (copies £1 each) which is on sale at the Peak District Lead Mining Museum in Matlock Bath, and also from the Agent’s House or Smithy when Society members are on site.

We are very proud of the work that we have done to preserve this important and unique industrial heritage site for over 50 years, making it one of the top attractions in the Peak District. But please remember that it is a former industrial site – as well as a Scheduled Monument with legal protection – so facilities are very limited. For example, apart from a small area at the centre of the site, the ground surface is uneven and unfortunately not suitable for wheelchair access or children under 5.

Visitors are asked to take care not to interfere with any aspect of this Scheduled Monument to ensure the site, with its historic artefacts and buildings, remains in good condition for the enjoyment and education of future generations.

For the enjoyment of yourselves and others who visit, please observe these guidelines: