The repair work to the Square Chimney, the associated ground level flue and the small building at the base of the chimney at Magpie Mine (that were reported in our previous article), have now been completed. The casual observer might comment: “I can’t see what you’ve done!” And so it should be. The object has been to preserve the appearance of the chimney whilst making sure that it will remain standing for many years to come. You can come and see for yourself the work that has been carried out at our National Heritage Open Day event on September 11th.

Three years ago, the Magpie Mine Management Plan included a structural survey of all the buildings on the site, and although the exterior of the Square Chimney appeared to be in reasonable condition (given that it was built over 175 years ago), some of the interior stonework had fallen away. 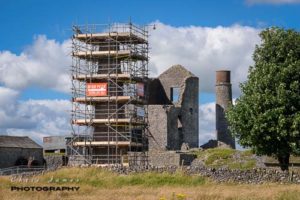 The Square Chimney surrounded by scaffolding during the work

Once the chimney had been surrounded in scaffolding, the first task was to remove the concrete plug in the top of the chimney and get a better look at the inside. An area of about two square metres of the lining had failed about three metres from the top, roughly the level of the projecting string course. We had feared that the whole of the top of the chimney would have to be dismantled, but in an operation that might be classed as ‘keyhole surgery’, our contractors opened up small ‘windows’ on the north-west and south-west sides. Working from the outside, they rebuilt the defective lining and then replaced the external stonework.
Much of the chimney had been repointed in 1976 using the method of ‘scotch pointing’ that was in vogue at the time. Scotch pointing uses a hard cement-based mortar with fine aggregate, but experience has shown that in harsh weather conditions, it is the stonework that then fails rather than the mortar. About 50% of the pointing was in need of replacement: replacing the remainder could have resulted in removing sound mortar and damaging perfectly good stones in the process. A lime-based mortar mix was developed that has the same gritty appearance and the same colour as the existing scotch pointing. Matching the colour was not easy: the mortar on the south-west and north-west sides is significantly darker than the remainder, presumably because of pollution brought in on the prevailing wind. Separate mixes had to be made up to suit each side of the chimney.
Over the years, several of the large limestone slabs forming the roof of the ground level flue have broken, leaving dangerous holes. The temporary corrugated iron covers were unsightly. New roof slabs have been installed, covered with random stonework to protect them, and it is hoped that the surface will gradually grass over to restore the appearance of the flue.
The small building at the base of the chimney is believed to be an adaptation of the original, much larger, boiler house. The floor had been hidden by stones, soil and grass, but when this was cleared away, it revealed a mixture of stone flags, brick paving and earth floor. We plan to produce an archaeological record of this surface, and will be taking advice on developing a long-term scheme to preserve it.
We have been conscious that there is very limited information available to visitors to the Magpie Mine site, and so the next phase of the project is to prepare and install interpretative panels within the boiler house. These will provide a general history of the Magpie Mine, an explanation of the work carried out on the chimney and flue, and a description of the ecology of the site. This location has been chosen so as not to spoil the photogenic qualities of the site with large, intrusive, information boards. 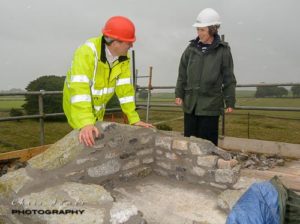 The Duchess of Devonshire at the top of the Square Chimney

Whilst the building work was in progress, we held two ‘Open Days’ for invited guests. On the first day, we hosted representatives from the Peak District National Park Authority, Natural England, CPRE and the local Sheldon Village History Group, whilst on the second occasion we were visited by the Duke and Duchess of Devonshire, Lord and Lady Burlington, and the Chatsworth Estate Land Agent, Nick Wood. Everyone showed great interest in the work being carried out, with many taking advantage of the opportunity to ascend the scaffolding for unrivalled views across the surrounding countryside.
We are very grateful to the Heritage Lottery Fund for awarding us a grant of £74,000 towards the work, and the Society will make a cash contribution of about £8,000. The Heritage Lottery Fund also recognises the value of volunteers’ input, both as practical labour and in the management and administration of the project.
We would also like to thank our Contractors, Midland Masonry, for an excellent job, carried out pretty well within the planned timescale despite some appalling weather, and John Wright of Weston Allison Wright, for overseeing and managing the project.