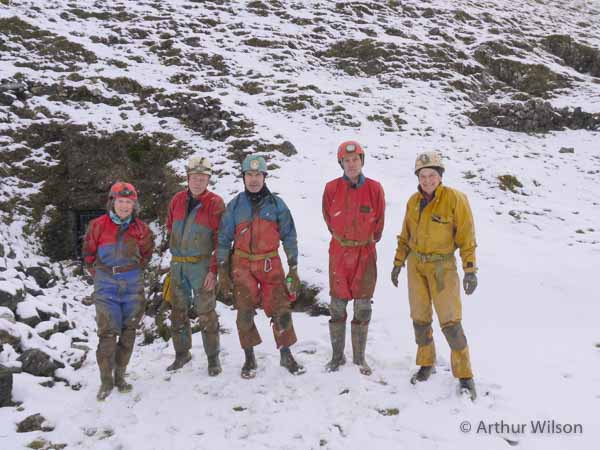 Despite atrocious weather conditions on the 11th of February, six members of the PDMHS UEG made it to Pikehall for a trip into Mouldridge Mine. It was considerably warmer and drier underground than outside! We examined the main level and the somewhat ‘honeycomb’ effect of all the various little digs that the miners had developed to find the lead ore. These is quite a lot of mineralisation to see, but it is not in any particular linear vein, more a case of picking at it as and when you see it….. which led to the ‘honeycomb’ effect mentioned. Finally we looked at the passage into the lower workings, following the compressed air pipe for guidance. The degree of mineralisation is not as strong as the other parts of the mine, but we did find a few small ‘vugs’, about 2-3 cm in size, with some beautiful tiny crystals inside. Overall we spent about three hours underground before returning to the colder fresh air outside. Unfortunately the trip to the pub didn’t materialise due to poor driving conditions (and a continuously sounding car alarm!) .
Author:- Arthur Wilson