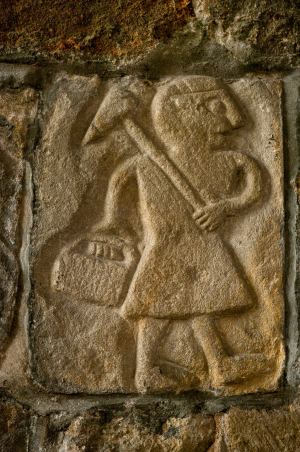 The recorded history of Peak District mining laws and customs goes back as far as 1288,when a Royal inquisition held at Ashbourne accepted that 14 customs had been used in the High Peak beyond living memory. In 1644, the lawyer George Hopkinson wrote a treatise on the customary mining laws of Wirksworth wapentake in which he investigated these and concluded that they did have legal force. Although no original copy of this is known to exist, an 18th century manuscript copy is in the Sheffield Archives and this was used in 1948 by William Allen-Potter for a  small private reprinting of it. A copy of this rare publication was bought on Ebay some years ago by a society member and subsequently donated to the society’s library. A scanned copy is available  through the link below.

The Low Peak laws were given in verse in 1653 by Barmote court steward Edward Manlove, and the text of this poem is reproduced in Arthur Stokes’ article on lead mining in Derbyshire and Jim Rieuwert’s 1988 booklet which celebrated the 800th anniversary of the Ashbourne inquisition. Copies of both are available from the Mining Museum. The lawyer Thomas Tapping, who wrote treatises on the mining acts (see below) also published a reproduction of it with notes, a copy is available online here.

The customary laws of the High Peak, Low Peak, Stoney Middleton and Eyam, Ashford, Litton and Tideswell  were published in 1734 by George Steer as “The Compleat Mineral Laws of Derbyshire”. This has been scanned by Google and is available here.

There were a number of legal disputes in the late 19th century to establish whose responsibility it was to ensure that old mine workings were made safe. A transcript of one of these is reproduced here, where Arthur Stokes (Mines Inspector for the Midlands) took a Mr. Arkwright to court over some unsecured shafts on his land near Cromford, and established that a landowner had a responsibility to ensure the public could not inadvertently fall into or access old mine workings on their land.
Follow this link to read the Stokes-Arkwright case.