The Peak District Mines Historical Society’s Conservation Group had been working at nearby High Rake Mine from 2000 to 2008, and during that time there had been increasing contact with the local community. As the High Rake project came towards its finish, we were approached by the Great Hucklow, Grindlow and Foolow residents regarding the mining remains at Silence Mine.

A brief history of Silence Mine

Silence Mine and other nearby mines were originally started in about 1685, when it was first realized that Hucklow Edge Vein (the same vein worked at High Rake Mine) continued below the shale outcrop east of Great Hucklow village. The course of the vein was determined by a series of shale-gates driven northwardly under Eyam Edge from the lower ground of the limestone outcrop (alongside the Foolow to Eyam road). The mine was re-opened by the Milldam Mining Company, at a time when their reserves at their main site at Great Hucklow must have been showing signs of becoming depleted. They equipped the mine with a steam engine – probably used for both pumping and winding. 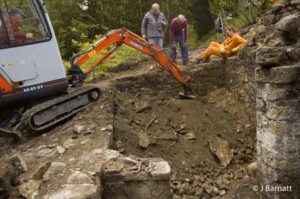 The engine house was built in 1873-5, and the reopening was an ambitious, but unsuccessful, venture that started with re-sinking a deep early 18th century shaft through the shale cover, and then pumping out the old workings. In 1877 they produced a small amount of ore, but then sank the shaft deeper to get below the old man’s workings. From levels at 86 fathoms (516ft/157m) below the shaft collar they started producing ore in 1879, but by 1881 production had stopped while a new pumping engine was installed – probably in the old engine house – and then they may well have sunk the shaft even deeper. In 1883-84 ore was again being produced, but not in sufficient quantity to be viable. The mine closed at a time when lead prices had dropped to a point where, as a general rule, mining in the Derbyshire orefield had become unviable. In 1886 the Silence Mine shaft collapsed in spectacular fashion, leading to it being reported in the press, and leaving a large hollow around its top. Adjacent sheds and other plant disappeared down the abyss. Details of the engine are missing and we only had a sketch plan from the Derbyshire Records Office to provide us with an idea of the layout of the site.

As part of the Silence Heritage Site Project the Society agreed to carry out an archaeological excavation of the site and to conserve what remains of the buildings. The main focus of the work was the horizontal steam engine house, the accompanying boiler house, coal cellars, access passage, chimney-flue and a buried rocker pit for flat rods used for pumping. These structures were largely reduced to footings, except the back wall of the two cellars and the rocker pit, which retained its stone roof. The cellars had also been complete in the early 1970s but were subsequently demolished during spar mining operations. The rest had been removed in the late 19th century.

The excavation took place between 2008 and 2010 where the Conservation Team was led by John Barnatt. A report on the work carried out was published as “Silence Mine, Grindlow, Derbyshire: Investigating an 1870’s Steam Engine House” in Mining History Vol. 18 No. 4. Copies are available for purchase from the Peak District Mining Museum in Matlock Bath.

Further information regarding Silence Mine.

Silence Mine can be found near the village of Great Hucklow at OS Grid ref: SK187780. The mine is on a public footpath, and there are no access restrictions.

The late Nellie Kirkham left some useful field notes recording the site as she visited it. Here is a link to an article by Nellie Kirkham about Silence Mine.

You can also read here on the Peak District National Park Authority‘s website an account of the acquisition of the Silence Mine site.