The following is a report written by John Barnatt in ‘Observations and Discoveries – Part 55’ in Newsletter 157 January 2016.

A new early lead smelting site was discovered by accident in July 2015 when returning from looking for something else. This lies on Open Access moorland at the western side of Lodge Moor (grid ref SK 2360 8867), which is part of the Ughill Moors (not the better known Lodge Moor area of Sheffield). The site comprises a discrete mound of slag, standing out in the landscape because of its short green grass surrounded by the more usual course pale brown grasses. It comprises a smooth-profiled mound just under 20m by 8m across and 1m high, with a steep downslope side and a flatter top. The shape of the mound strongly suggests that there was a hearth near its upslope edge on the flat top, rather than this being a dump of material placed here from elsewhere in advance of further processing. Similarly, the smooth sides indicate there has been no attempt to remove material for washing, further smelting or transport to another site. A variety of slags are visible in a floodwater-erosion patch and small animal scrapes; there are many cream coloured pieces that are light in weight with multiple voids, but other material includes very heavy pieces containing only part-smelted galena, and a few small pieces of grey-green glassy material. 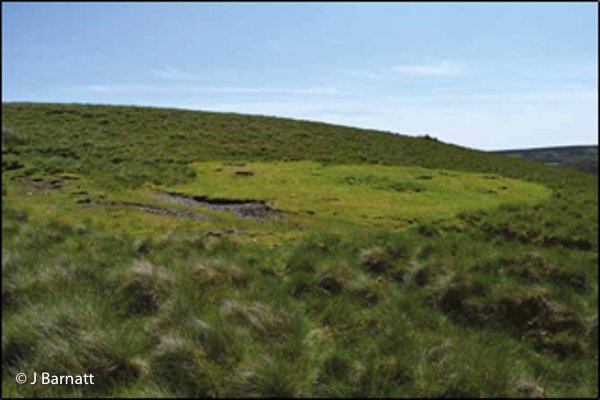 The slag heap at the Lodge Moor bole at the base of the steepest part of the slope. Photo: John Barnatt

Contrary to conventional wisdom as to where medieval to 16th century smelting sites are located in the Peak, it is not on the crest of the scarp, but placed nearby at the base of this short steep slope. However, even here it would have caught the predominant wind coming from the west and from a smelting perspective the site may well have been just as good as the crest. The location of the Lodge Moor site and its character, as a pile of slag with no surface sign of a smelting hearth, has parallels in the Yorkshire Dales (Smith 2006; 2011; Smith et al. 2014). A shallow set of intermittently-traceable hollow way braids pass close to the site, coming diagonally up the slope from southwest to northeast, and this old route could have been used to access the site. A cart track below is later and unlikely to be related. Presumably the ore came from the northern part of the orefield via the Hope Valley, while the smelted product perhaps went eastwards into the northern hinterland of Sheffield.

What we don’t know for sure is whether the pile of slag is at the site of a bole hearth used for primary smelting and/or one where slags were re-smelted in a blackwork oven; however, that the visible debris contains large pieces of slag including pieces with only half smelted galena suggests the former, but more research is needed on what to expect of slags at both stages of the process. There may have been other smelting elsewhere in the vicinity, as David Kiernan has found very small amounts of scattered slag nearby on the crest of the ridge (centred SK 2362 8860); his thoughts on the site will be the subject of a separate note in the next issue.

The new discovery adds another example to the small list of known early lead smelting sites well to the northeast of the orefield (Barnatt with Rieuwerts and Roberts 1996, Fig. 2, Appendix 7.1; Bevan 2004, pp. 79, 93; Bevan et al. 2004; Kiernan 2012). These include several sites in the bottom of the upper Derwent valley and tributaries, with an excavated 15th century example at Linch Clough, two upland sites on the eastern flank of the Derwent valley at Bole Low and Lead Hill on Derwent Edge, and another further east on Bole Edge at Strines.

The Lodge Moor mound is the most intact known bole smelting site in the Peak District; its slag heap is undisturbed, and the obscure location at the fringe of the area where moorland smelting took place means it escaped having the material carted away in postmedieval times to be re-smelted using more advanced water-wheel powered and cupola hearths. The date of the smelting on Lodge Moor is not known, but a medieval rather than early post-medieval date is perhaps most likely, given the lack of historical documentation.

Many thanks to David Kiernan for commenting on a first draft of this paper and reminding the author to consider the slag smelting option, and for a subsequent site visit with the author (together with Richard Carr, Chris Heathcote, Phil Shaw and Dave Williams who all contributed to the debate). Dave Williams established the site locations with GPS.

You need to login to view the rest of the content. Please Login. Not a Member? Join Us