Stanage Edge is probably best known these days as one of the top spots in the Peak District for rock climbing, and many of the thousands of people who come here think of it as an example of unspoilt wilderness. Last Sunday, however, archaeologist John Barnatt led a walk to look at some of the less well known industrial heritage of the area, and show some of the ways in which people have influenced this landscape.

In warm sunshine and a light breeze, twenty of us headed up towards Stanage Edge. The path we were following was an old packhorse road, as we soon saw evidence of this at the Buck Stone. This gritstone boulder was once used as a sort of moorland inn, with learn-to shelters around it, as can be seen from the sockets cut into the stone to take timbers. Small cuts were also made in the rock to drain water away, and these are still clearly visible today, along with various inscriptions – including one dated 1666. Some of our more adventurous members climbed up onto the top of the rock to look at a strange stick man that has been carved into it – when, and by whom, is a mystery.

Following medieval packhorse roads and quarrymen’s tracks, we made our way to the top of Stanage Edge, where John showed us one of the numbered troughs that has been carved into the natural gritstone slabs. These were carved in the early 20th century to provide drinking water for grouse, and are unique to the Stanage area. A short trek across heather moorland brought us to the first of two small collieries that worked the Ringinglow Seam here. Stanage Colliery was probably worked in the 18th and early 19th centuries, and is visible now as a series of 14 collapsed shaft hollows – one of which has recently been fenced off by the Coal Authority. One shaft hillock, which has a broad, low flat top, was the possible site of a horse gin. John explained in detail what is known about the history of this moorland colliery – being briefly upstaged by a grouse strutting around behind him!

Then it was on to Stanage Pole Colliery nearby, following the Long Causeway which is often referred to as the “Roman Road” – but which John explained in fact dates from the  late 18th century. Stanage Pole Colliery also worked the Ringinglow Seam, though it had ceased working by 1811, and survives today as a series of run-in shaft hollows – some of which are flooded. Five of the shafts have causeways linking them to the Long Causeway – features which, without John’s expert eye, none of us would have have spotted. 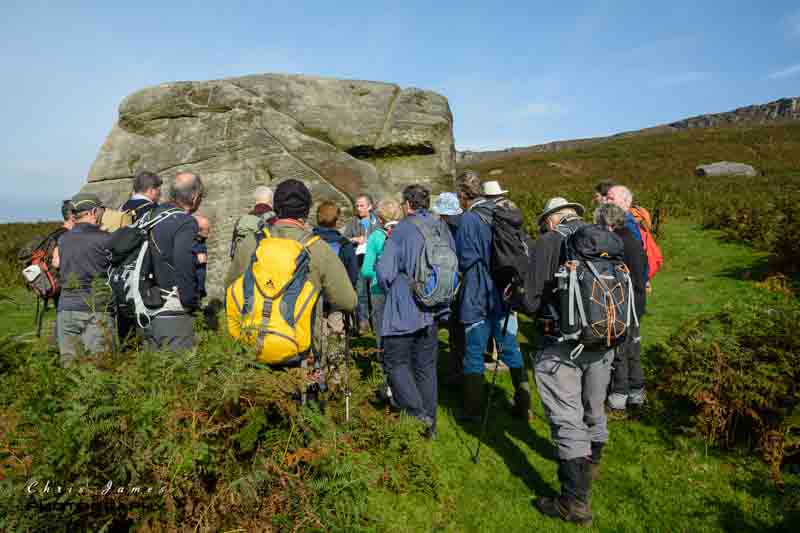 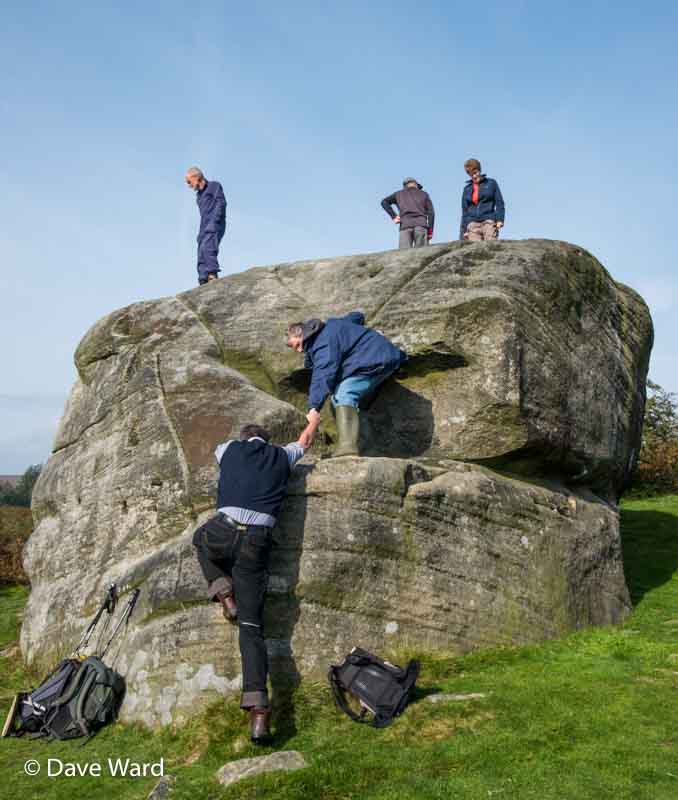 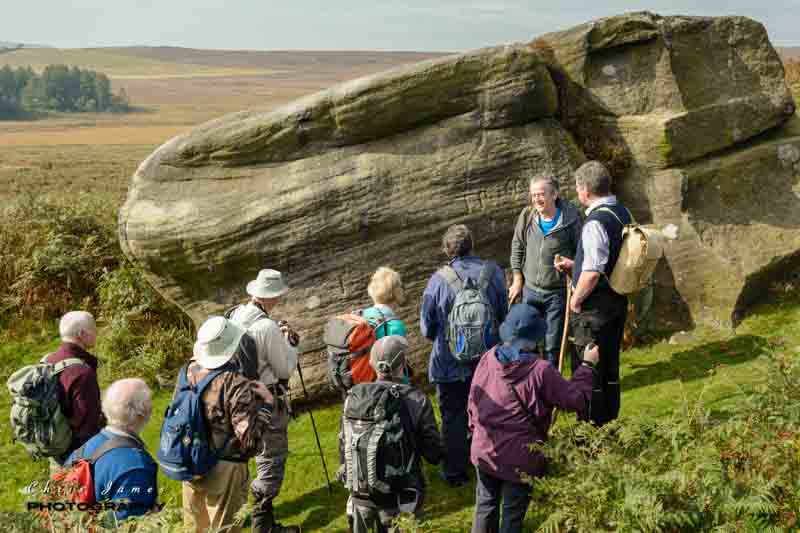 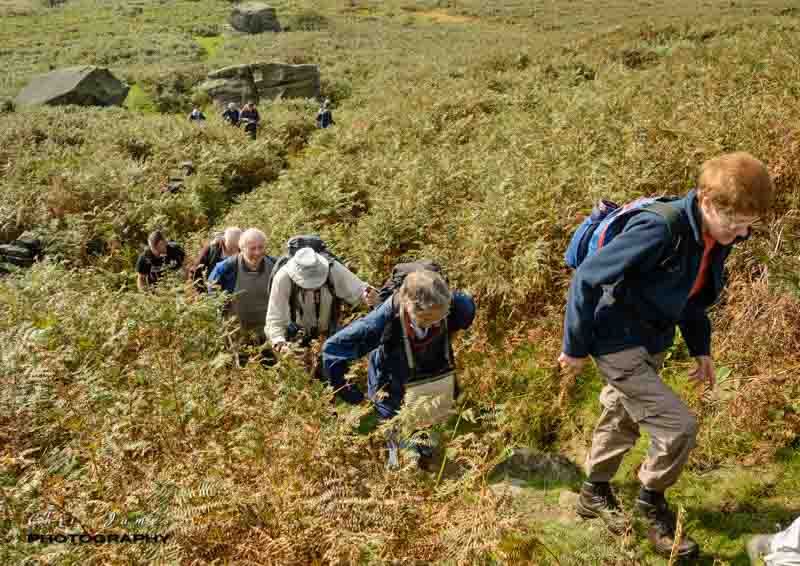 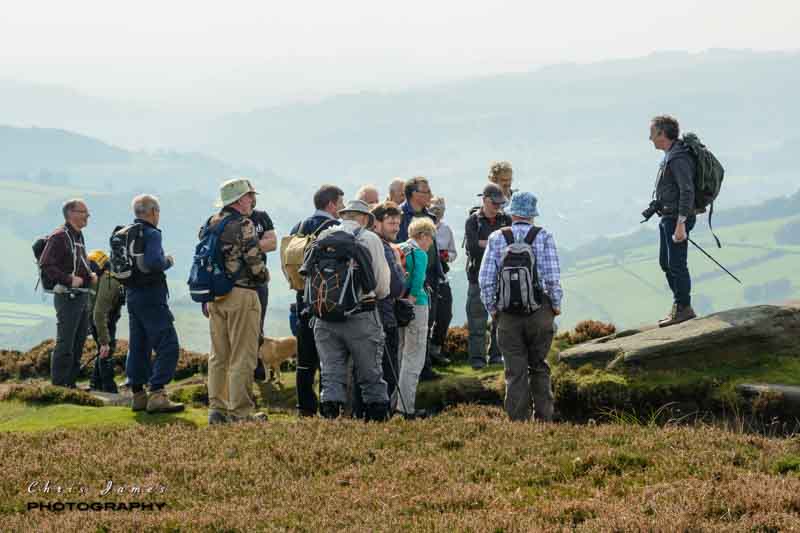 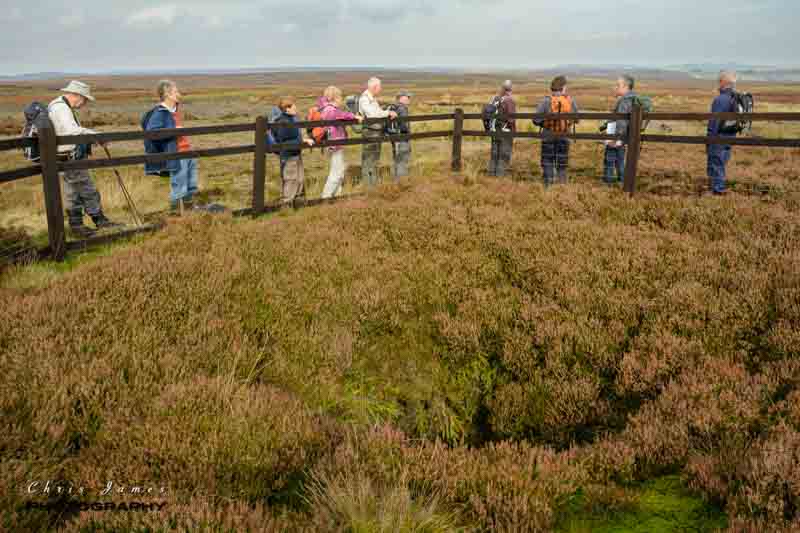 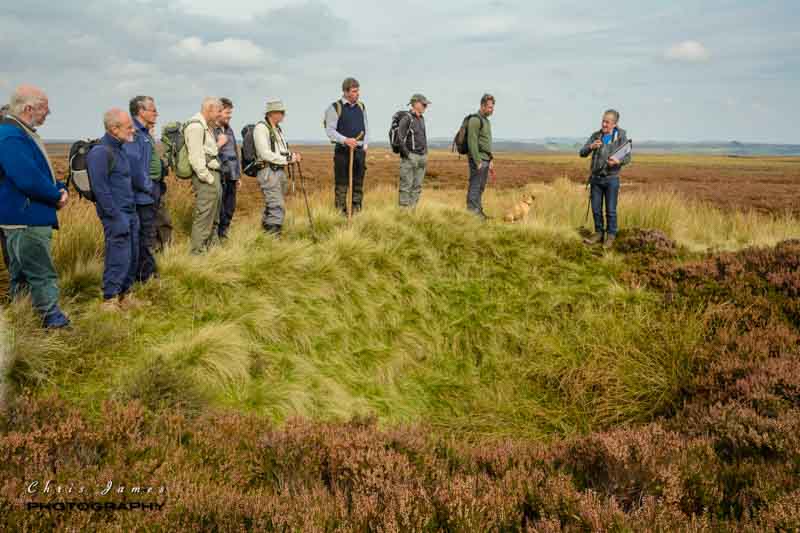 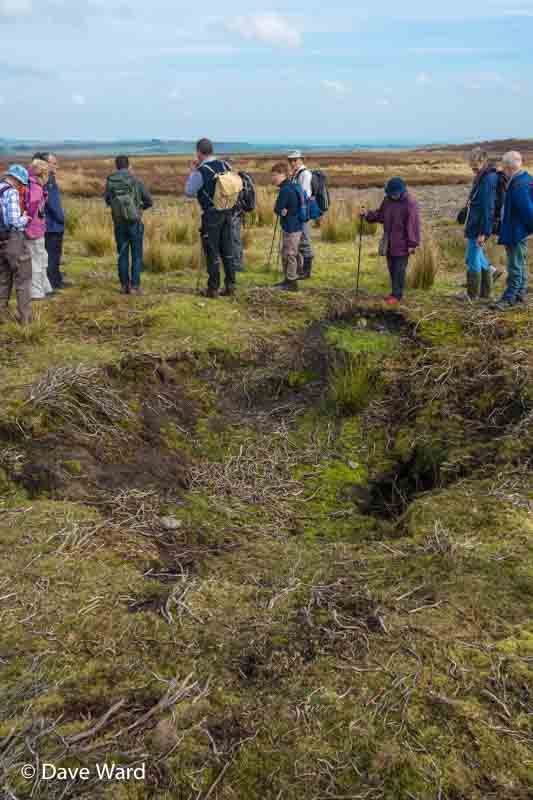 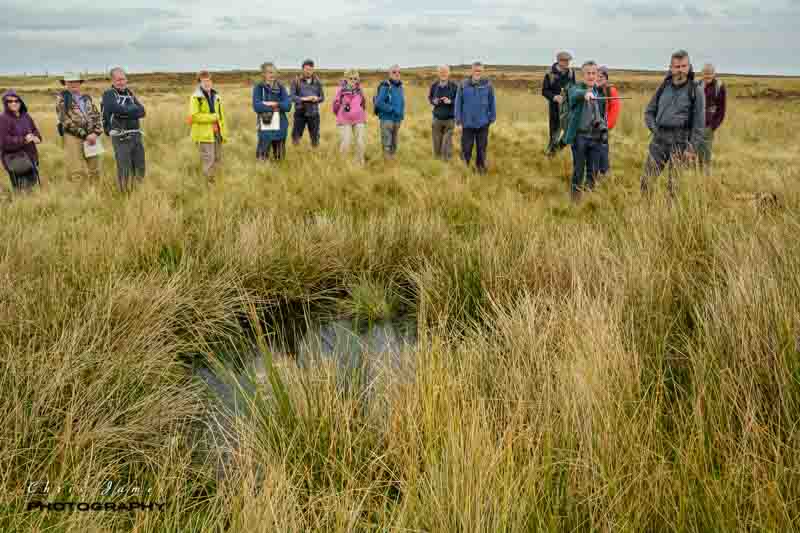 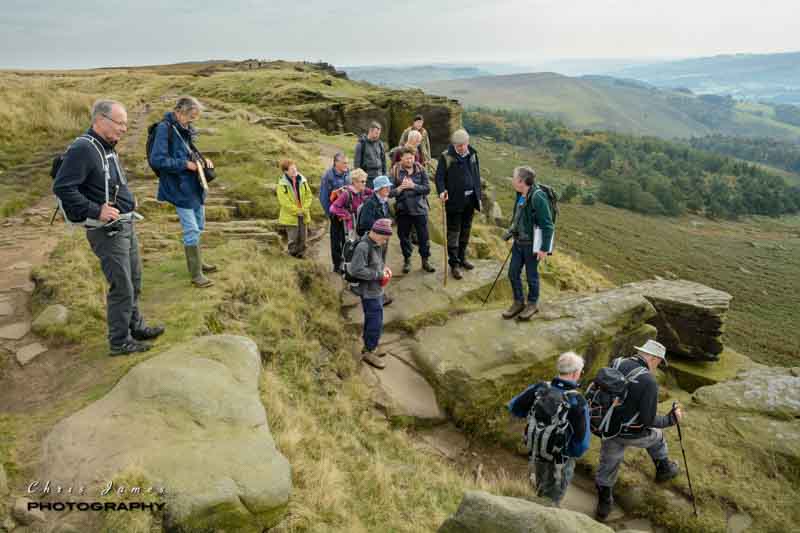 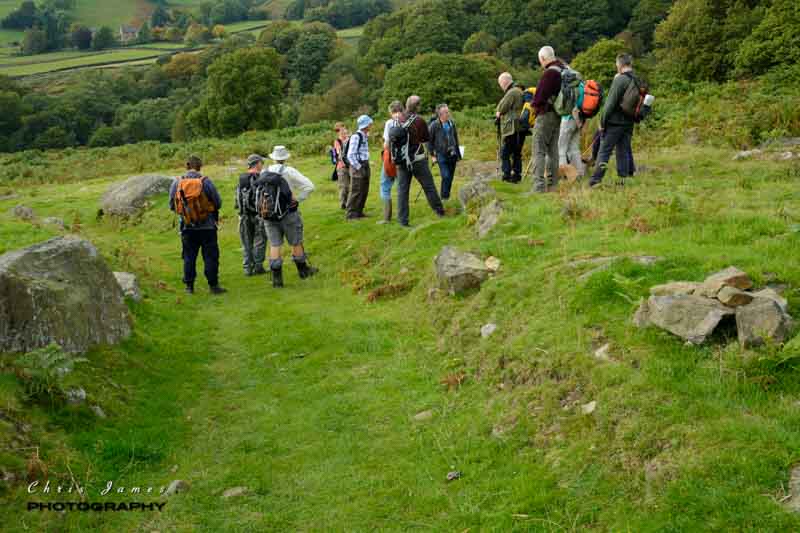 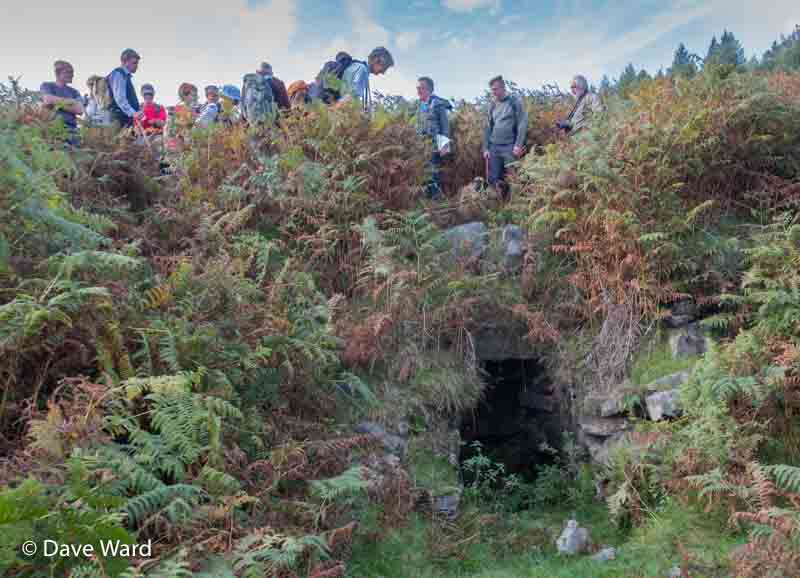 Returning to Stanage Edge, we followed more medieval roads and hollow ways down past North Lees Hall to the site of Greens Mill. This water-powered mill was originally the site of a lead smelter, and John showed us some of the slag material that is still present. Later, it was converted to a paper mill, producing brown paper for wrapping the pins that were produced in nearby Hathersage.

From there, a short but steep climb took us to the site of a small (and very well hidden by the bracken) lime kiln. This is where it is speculated that some of the coal produced in the nearby collieries that we visited was burned – to produce quicklime for spreading on fields to “sweeten” the soil.

A final short ascent led us back to our starting place, and the end of a very enjoyable day’s walk. Everyone had a good time, and learned a lot in the process. 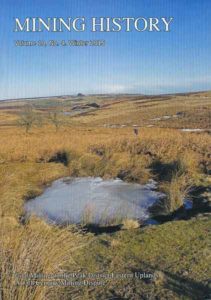 More information about the collieries on Stanage and the Eastern Moors was published in the article by Jim Rieuwerts and John Barnatt in Mining History Vol. 19 No. 4. Copies can be purchased from the Peak District Mining Museum in Matlock Bath.

The Peak District Mines Historical Society organises guided mining and industrial heritage walks throughout the year. They are free and open to all. Further details can be found here.