As with many of our recent walks, we were lucky with the weather at the end of October for our guided heritage walk looking at some of the disused gritstone quarries on Stanton Moor. Fourteen of us met near Birchover, including one couple whose ancestors quarried at Stanton for at least 200 years. They brought with them the wonderful photograph below of several members of their family with a steam crane at one of the quarries. 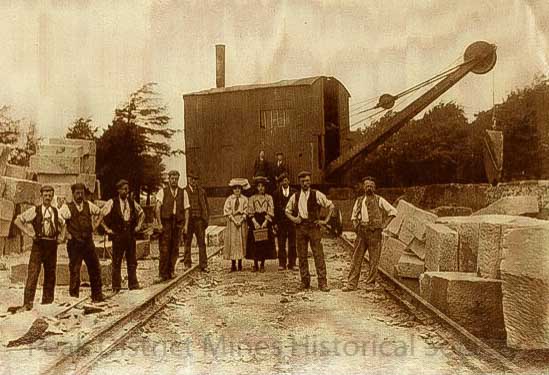 It is possible that the quarry shown was the first one that we looked at – New Park Quarry. A steam crane was installed here in 1926, and several Bronze Age funerary urns were found while preparatory work was being done. A gritstone crane base is still visible in the quarry.

A short walk then took us to the site of a former sawmill that was working towards the end of the First World War, when the moor was clear felled by a Canadian Army unit to provide timber for the trenches. The timber was transported across the moor by a narrow-gauge railway drawn by horses or mules, and the remains of the stone-built incline that once led down to the sawmill from the moor can still be seen.

Next stop were Stanton Moor Quarries, which were in use until the 1950s producing blockstone, grindstones/pulpstones and kerbstones. The combination of the warm sun and the climb up into the quarries soon had people shedding layers of clothing, and we stopped for a while to enjoy the calm sunny conditions, before continuing to the Nine Ladies Stone Circle – one of three stone circles on the moor – where we stopped for lunch.

Then it was on to Lees Cross Quarry on the eastern side of the moor. This very large quarry opened in the 1850s after the arrival of the railway at nearby Rowsley, and is now perhaps best known as the site of a 10 year environmental protest after the owners tried to reopen the quarry in the 1990s. Nature has healed some of the scars of industrial scale quarrying, but there remain two sheer gritstone faces about 100ft high – one of which has some inscriptions from 1912, 1917 and 1919 high up on the rock. We also inspected a large crane base, stone cutting shed, some very thick pulp stones and a well-preserved smithy amongst other quarrying features that still survive here.

The remainder of the walk was along the top of the eastern side of the moor – and was mainly spent looking at some of the C19th features relating to the “improvements” to promote the beauty of the planted woodlands, lofty crags and scenic views which made it a desirable place for Victorians to visit. For part of the way, we followed one of the three scenic rides which used to cross the moor north to south – the “Duke’s Drive“. Although it has been quarried away in places, a substantial part of it survives, and there are several natural gritstone outcrops along its course which have had detailed inscriptions and ducal coronets carved into them. Two of these are known as the Duke of York Stone and the Duchess of Sutherland Stone, and there are other (unnamed) ones which perch precariously above one of the sheer rock faces of Lees Cross Quarry. The Cat Stone is another large outcrop that we inspected, and several people took advantage of the steps that have been carved into it to climb to the top to admire the views. Close to it is a boundary stone which probably dates from the time the moor was enclosed, as it has the letters BT and DR inscribed on it. These are thought to refer to the two largest landowners – Bache Thornhill of Stanton Hall and the Duke of Rutland – who divided up the moor between themselves after 1809.

As the sun dropped towards the horizon and the temperatures fell noticeably, we just had time to inspect and (for the more adventurous) to attempt to climb two more natural rock outcrops – the Gorse Stone and the Cork Stone. Then for some of us it was down to Birchover to sample some of the Birchover Brewery beers in the warmth of the Red Lion. A proper end to a PDMHS walk! Here are some photos from the day: 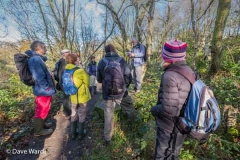 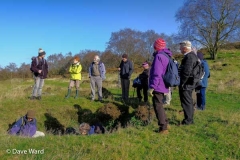 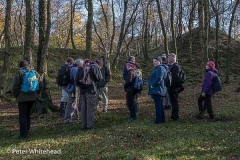 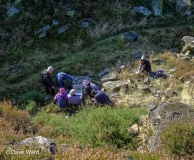 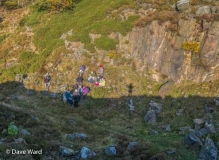 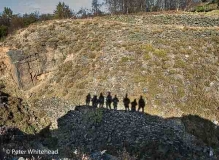 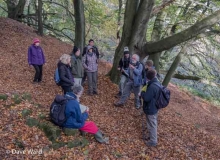 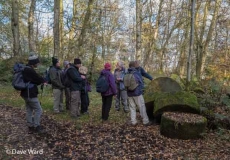 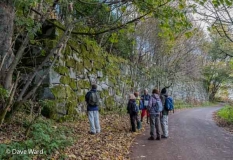 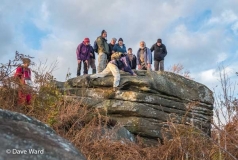 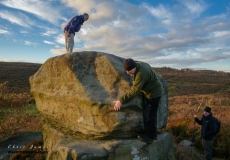 You can also see this lovely 6 minute video slideshow of the walk put together by Peter Whitehead below.

If you would like to find out more about Stanton Moor, its archaeology, history and quarries, there are several maps and a very useful conservation plan available for download from this page.