The weather forecasts before our walk on October 13th had been pretty ominous, with rain, high winds and even lightening forecast. But PDMHS walkers are a hardy bunch, and a total of 14 of us turned out to brave the elements at our meeting place at the bottom of Coombs Dale in Stoney Middleton.

This was an all-day circular walk which was packed with features of mining interest. Only a couple of fields from our starting point, we crossed over Peakstone Rake by the site of Wren Park Mine, before entering Coombsdale Wood with its old limestone quarry. The quarry has been used as a tip for domestic waste in the past, and here we found a large shaft covered with scaffolding poles – which we concluded was probably an old lime kiln which has been almost completely buried by the tipping.

The next stop was Shepherd’s Mine at the junction of Coombs Dale and Ryedale. This C19th mine was one of many small lead mines in the area, and is known to have been worked from at least 1793. Today, the remains of a sizeable miners’ coe and the collapsed tail of Shepherd’s Sough can be seen, along with workings along two parallel veins. 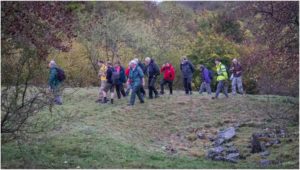 The miners’ pond at Enterprise Mine

Only a hundred yards or so away is Harpin Hill Mine, which was the richest of the small mines in this area and in virtually continuous production until 1780 – including just under 120 tons of lead between 1743 and 1753. In 1853, the mine was one of several in the nearby area which were worked under the title of Enterprise Mine, and we inspected the site of two levels which were begun at that time. One is now collapsed, but it originally has a dressed gritstone entrance that was still open until the 1950s (when it was vandalised). The eastern level is however still accessible, so of course several of our party had to pop their heads in for a look. Then it was a case of stopping Richard from squirming down every partially blocked mine entrance nearby, so that the rest of us could move on and look at the ruined bouse teem (ore hoppers) and unusual miners’ pond – which was originally fed by a stone lined leat. 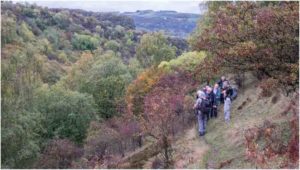 Autumn colours in Coombs Dale above Sallet Hole Mine

We then followed the path up the valley side until we were above the entrance to Sallet Hole Mine, which was originally driven as a sough to the workings under Longstone Edge, before being modified into a haulage level in 1840-42. A 32ft diameter waterwheel originally powered crushing rollers here, but all traces of it have been destroyed by later workings. In the C20th, Sallet Hole Mine was worked for fluorspar, first from 1926-30, and then from 1965. It worked Deep Rake below the depth of the opencast workings on Longstone Edge, and in 1990 produced 73,000 tonnes of ore. It finally closed in 1998, and water still flows from it today. 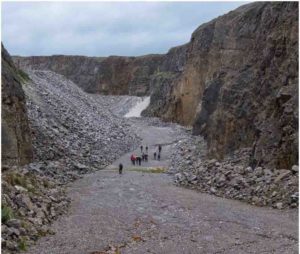 Next we headed to the large opencast fluorspar workings in Deep Rake itself, where several of our party found interesting mineral samples, and we could also see where the workings had broken into the original Sallet Hole Shaft. Storm Callum was making its presence felt by now, and the winds were funnelled by the high cliffs in the workings. As we emerged onto Longstone Edge, a gust of 38mph was recorded – though the wind was incredibly warm for the time of year.

A short walk brought us to Watersaw Mine, which was originally connected to Sallet Hole Mine underground, and took over as the main haulage route after Sallet Hole closed. Watersaw (also known as Sallet Hole No. 2) closed in 2009, and the site has recently been cleared, leaving just the large gated entrance. 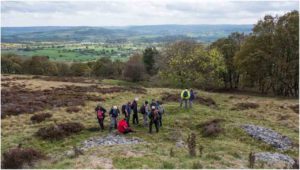 Remains of the tramway on Longstone Moor

Only a few hundred yards away we inspected a large trench, which once contained a narrow-gauge tramway used for transporting fluorspar from the Watersaw Rake workings around the time of the First World War. At one end, the tramway is raised on an embankment, where it is thought that tubs would be emptied into a small building (the remains of which are still visible), and the fluorspar possibly crushed and screened, before being taken by a second tramway to the road below. 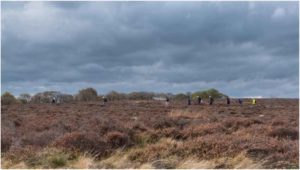 From there, a blustery walk in sunshine across the rare limestone heath took us past the old Watersaw Rake workings and over the highest point of Longstone Moor to Cackle Mackle Mine. This C17th lead mine is now a Scheduled Monument, but the spoil heaps were reworked in the 1950s and 60s by – among others – the Baghdad Oil Company, who sent barytes back to Iraq for use in drilling oil wells. After shining a torch down one of the large and impressive shafts that remain, we set off again towards the (now disused) settling lagoons of Cavendish Mill – which is the only fluorspar processing mill in the UK – and down past two of the huge disused limestone quarries in Stoney Middleton. One of these (Darlton Quarry) was the site of one of the last German bombing raids in WW2, when the tarmac plant was hit in July 1942, causing minor damage. The quarry was working until less than 10 years ago – the last one in the village to close.

We then did a small detour to look at Hawkenedge Well (a possible mine sough), and two disused lime kilns on the way back to our starting point – after a very welcome pint in the Moon Inn.

A fine 7 mile walk in unseasonably good weather which everyone seemed to enjoy, and which notched up the following:

Thanks to Ted, Dave, Martin and Richard for all their contributions, to Dave for use of his photos, and to Rob at British Fluorspar for allowing us to go into the opencast workings on Longstone Edge and to the site of Watersaw Mine.

This guided walk was one of a series of regular heritage walks run by the Peak District Mines Historical Society. You can see all of the mining heritage walks and underground mine trips that we currently have scheduled here.